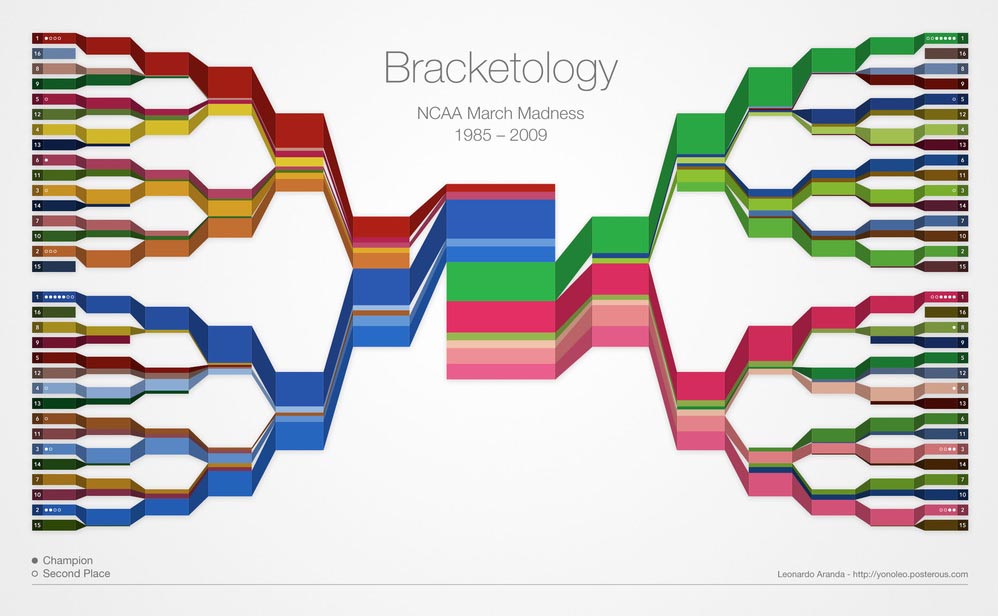 Leonardo Aranda takes a gander at who has won in each round since 1985, by ranking, with a color-coded bracket that resembles a stacked area chart.

It’s college basketball time again and friends and co-workers gather around the water cooler to talk top seeds and Cinderellas. I don’t know about you, but I really enjoy watching the NCAA tourney. I’m not into the NBA as much anymore because the sport has turned into a commodity. It’s all about the money. The NCAA also is very much about money but the kids that play are truer to the game and not so much about the money. So there is still heart in the game and it makes for interesting and exciting matchups.

Plus, there is less predictability. Contrary to the chart above, there are certain teams that sometimes make a run for it and successfully beat teams that they really had no business beating. I think this simply illustrates the power of the mind. Those successes come from those teams that totally commit to themselves and their desire to achieve greatness. It happens only once every couple of years, but when it does it brings a ton of excitement to the tournament.

I’ll be filling out my bracket(s) again this year and I can tell you that one of my brackets will have some big upsets predicted in the hopes that we have another “Cinderella” team in the making. It makes watching the event much more interesting and you find yourself rooting for that cinderella hard. I hope that this year will be one of those years!

A couple of my early predictions for potential Cinderella greatness – South Dakota State and Montana! (Subject to change as we get closer to the tourney)

Enjoy the tourney and good luck!