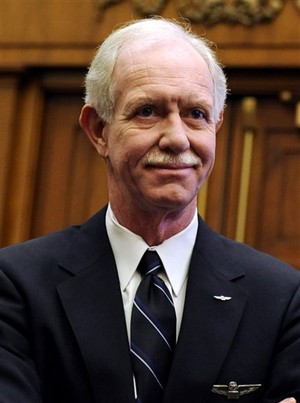 One of the most impressive keynote presentations I’ve ever seen! WOW!

Captain “Sully” Sullenberger is the man! He talked about his life and the preparations he had leading up to that day (the Miracle in the Hudson). He described the 208 seconds that changed his life and the effects it had on everyone around him. His demeanor is of a man full of integrity, honesty, excellence, and pure leadership. If you want anyone to be piloting a plane for you, he would be it. We listened to the flight recorder and the conversations that went on during the flight and listened intently to him describe every thought and every manoeuver he made that day. It was incredible.

He later talked about process, innovation and other things that helped educate him throughout his career. Some pretty cool things were said. Some of his quotes during the presentation:

“I never knew on which 208 seconds my entire career would be judged.”

“I practiced calmness so that when I needed it I was able to force it into this extraordinary event.”

“Our reputations are built one action at a time”

“Real Innovation to me is, changing before you are forced to.”

Extraordinary person all around (to say the least). Thanks Captain “Sully” for the 5 minute chat after the presentation and for the book signing. I will truly treasure it.

Here are some videos of the flight recorder and the CCTV footage of the landing.
Flight Recorder
CCTV Landing