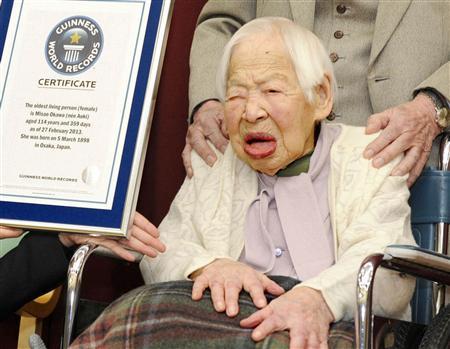 Misao Ookawa was born in 1898! She was recognized as the oldest woman alive! Can you even imagine that? – See Reuters article
I’d say it’s pretty hard to imagine, so I dug a bit to see what I could put together and give this some perspective. First, here’s a list of inventions that occurred during her lifetime. Most of these we take for granted everyday. She lived without them…patiently waiting for them to arrive as she lived.

Some added trivia before we go on – The oldest living man is 115 years old and he is also Japanese. In fact, Japan has the most living centurions on the planet. I think they’ve figured out the secret to longevity. We should eat more rice!

Ok, next. Check out this 10 minute video of events that occurred over the last 100 years that she lived. It’s seriously incredible to try to wrap your head around how long this lady has been around: Click Here

And finally, I want to list just 5 Achievements that I would love to see occur for the next 100 years or sooner.
1. The end of all Wars. A peaceful coexistence between all races and religions and having no International boundaries.
2. Elimination of all hunger, Poverty and Unemployment.
3. Funding to be no problem for all worthwhile sciences
4. The ability to control or somehow alter weather to benefit agriculture and to prevent disasters.
5. The Solar System to be “occupied” by Humans throughout with numerous scientific bases on Moon, Mars, and moon’s in Saturnian system. The beginning of  humanity living and venturing out to the Stars.

I think I would love to live in a world like that, but I don’t think I want to live 114 years!