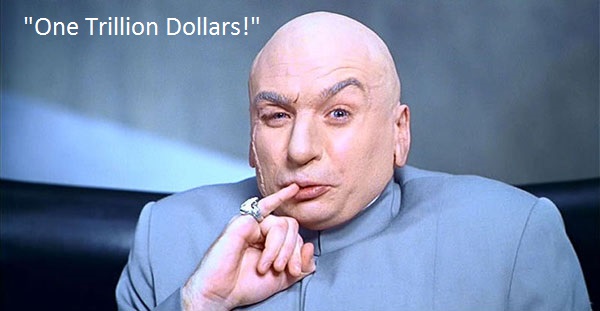 Last night I heard this news:
Joe Flacco (QB Baltimore Ravens) signed his new contract Monday worth $120.6 million over six years. He will receive a $29 million signing bonus, $52 million in guaranteed money and $51 million over the first two years of the deal.

So I did some research to see how many Billionaires there are in the world, let’s drop the millionaires out of the equation to make this a little simpler. There are currently 1426 Billionaires in the world that have a combined net worth of 5.4 Trillion Dollars.

How much is a Trillion Dollars? Well, it’s easy to say that but do you really know how much money that is? Let me try to explain that with some more research I did on the subject.

Let’s Measure a Trillion in Height
If you stack a trillion-worth of $1000 bills together, then:
1 million dollars = 4 inches high
1 billion dollars = 364 feet high
1 trillion dollars = 63 miles high (give or take a foot or two)
Note that this is a STACK, not laid end-to-end.
Also, if you stack one trillion one-dollar bills it would reach 68,000 miles in space!

How Much Is A Trillion Dollars?
If you spent $1 million dollars a day from the day Jesus was born until now, you would only have spent about three-quarters of a trillion.

The budget for the entire state of New York is $124 Billion. With just 1 Trillion dollars you could run 8 states the size of NY. The population of California is 34 Million. One Trillion people would equal 29,500 Californias.

One Trillion dollars today would allow you to buy Coca Cola, Apple, IBM, Bank of America, Ford, General Motors, Toyota, Motorola, AT&T, as well as Exxon Mobil and still have enough left over to live comfortably on just the interest from the billions left over…not to mention the profits these companies generate.

With one Trillion dollars, you could buy 50 aircraft carriers such as the USS Ronald Reagan and outfit each of them with 45 of the newest fighter jets (the F-22 Raptor) and pay for the crews to run them.

One Trillion barrels of oil would fuel the ENTIRE WORLD for almost 35 years!

So, are you getting the idea now of how much money this is? So think about this concept now. If the 1426 Billionaires joined forces and literally used ALL their money minus say $1 Billion each to keep for themselves, they would be able to do so much good in the world and still have plenty of money left with that 1 billion to not only live comfortably but accommodate their families to live comfortably forever!

It’s probably not right for me to imply that these folks should share their wealth, especially with people who didn’t earn the right to have it. Let’s face it, most of these people earned their money by working for it somehow. I also don’t want to blemish the fact that most of these folks do give away a considerable amount of money to charities and good causes.

I’ll close today by saying that if I ever join the ranks of Billionaire status. I promise that I will launch a campaign with the other members of the elite billionaires club to try to pitch my idea.

Oh, and now we can say “Poor” Joe Flacco is not even a consideration with his measly 100 million dollar contract….